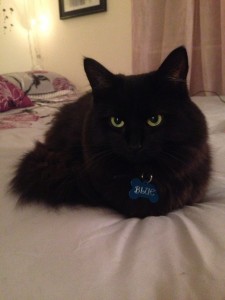 Black cats: you know of them and their supposed dastardly communion with witches. They haunt our Halloween greeting cards and just about every Halloween decoration you can think of. They are shrouded in magic and mystery, and they sometimes get a bad reputation for the two.

Black cats weren’t always considered bad luck, though. In fact, in Ancient Egypt, all cats, black ones included, were worshiped and honored. It wasn’t until Ancient Greece that black cats began to be considered ominous. In their myths, a black cat served Hecate, a goddess known for her dealings in the Underworld. Because of this, her furry black minions turned into omens of death, much like the Grim in Harry Potter and the Prisoner of Azkaban.

By the Middle Ages, black cats had gone from bad omens to incarnations of Satan himself. Throughout the centuries, countless cats have been captured and slaughtered for some silly superstition. This fear was rekindled in the Salem witch hysteria.

If you fast-forward to 2015, the stigma is unfortunately still there, and while it has started to improve, the month of October is still a scary time for the furry Halloween icon. Many shelters even halt adoptions around this time to keep cats looking for a forever home out of harmful hands.

Black cats have always been associated with witches and thus were accused and persecuted. Some believed the cats to be their familiars while others believed that witches turned into black cats themselves. Apparently, back in the day, even being a cat lady could get you killed.

There are myths of black cats around the world, and not all of them are as harmful or dark as a bringer of bad luck. In fact, in Asia and the UK, black cats crossing your path are seen as bringers of good luck. In the English Mid-lands, a black cat as a wedding present is believed to bring good luck to the bride, and the Scottish believe that good luck will befall a homeowner if they find a black cat sunning on their front steps. 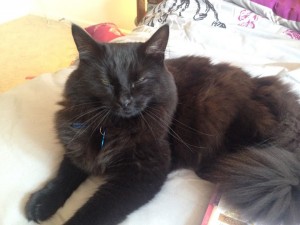 No matter the superstition, good or bad, it is important to remember that a black cat is still a cat and deserves a good and happy home. Black cats are loyal, lovable, and full of mysteries just like any other. How would I know? The pictures in this article are of my own little black cat. I adopted her and another cat from a shelter, and she has provided me with nothing but love and laughter. If you ever consider adopting a cat, consider our black feline friends. You could have a cute little piece of Halloween all year long!