While browsing through the blog Dear Hope, you’d never know that it was created for a class assignment. The blog hosts creative writing, informative articles, and personal stories from people who are living with mental illness or who have in some way been affected by mental health issues.

Most notable is the series curated by the blog’s founder, Paul Falcone, titled Coping: This Is Who We Are. The series includes diverse entries ranging from a graduate student living with anxiety to a 60-year-old mother writing to her children about her bipolar disorder.

When Paul was assigned to create a blog for his Writing for the Electronic Media course, he was faced with two options: write about music and his experience as a musician, which he considered “the easy route,” or write about mental health.

“The class was at a pivotal time in my ‘mental health journey’ where I hadn’t completely started advocating publicly yet,” Paul says. His roommate was so keen on his idea to choose mental health as a topic that Paul agreed. So Dear Hope was born.

In February, Paul decided to share his personal story of living with depression, anxiety, and insomnia on Dear Hope. By the end of the month, the blog had 1,500 views.

It became clear that readers were excited about this kind of first-person, confessional style story with a message of endurance and hope. That’s where Coping came from. It became a series focused on people’s personal experiences with mental health topics, ranging from anxiety and extreme situational stress to sexual assault.

That’s exactly what happened. Paul now communicates with people worldwide — everywhere from Australia to England — to collect their stories and publish them on Dear Hope.

The blog has now had over 20,000 views and has over 850 followers. Recently, Paul’s new collaborative photography series caused his viewership to spike, and he’s had over 3,500 viewers in a single day. The photography series, titled Consumed: Mental Illness Through Photography, aims to provide an artistic demonstration of what it’s like to live with a mental illness.
(Update: As of the end of October, Dear Hope’s viewership has spiked to 11,000 for the month.)

“Try picturing 2,300 people in a room,” Paul says when he’s describing the site’s number of viewers on the day of our interview. “And that many people all collectively went to a website that I started 7 months ago to read and see work that I produced or collected. It was incredibly humbling.”

With the help of photographer Zach Johnson and artists Josh Paciga and Alyssa Rogalski, Paul curated Consumed, which is only one out of many photography series he’s planning. Paul wants to expand the project, and his goal is to include as many diverse models in his photos as possible to show that mental health issues affect everyone.

Over the summer, Paul transformed his photography series into a pitch for a senior honors thesis, which is a year-long project that Commonwealth Honors Scholar candidates at his university have the opportunity to undertake. The thesis requires Paul to meet with a project advisor weekly, and he must also meet with his three-person committee several times per semester for feedback on the independent project. The thesis must be approved by his committee to grant him status as a Commonwealth Honors Scholar upon graduation, which is a statewide recognition of his academic achievement.

“I’m looking at how photography can be used to de-stigmatize mental illness and challenge what our perceptions of those illnesses are,” explains Paul.

Paul is also involved in the newly created Active Minds chapter on his college campus, which he helped his friend Danny Kochanowski organize last year. In the spring, he served as the Vice President of the chapter, but now he has become more of a Co-VP due to his increased responsibilities with school, his honors thesis, Dear Hope, work, and his tutoring position at the campus Reading and Writing Center. He’s so busy that he asked Danny to join Dear Hope as a co-editor and writer, and Danny happily accepted since he is just as committed to mental health advocacy as Paul is. Paul sees the added diversity as a bonus for the blog because Danny can offer a different perspective with his background as a Psychology major.

WSU’s Active Minds chapter ran a poster campaign last spring that shared a similar idea to Paul’s Consumed series. It featured students holding up signs about mental health issues along with inspirational quotes, with the intention of bringing awareness and ending stigma.

The chapter is currently in the process of setting up a “share your story” event on campus — along the same vein as the Coping series, only in-person. Paul was invited to be the kickoff speaker to inspire students on campus to get involved in the event.

As a result of organizations like Active Minds and online publications like Dear Hope, people are becoming more aware of mental health topics. In addition to expanding his Consumed series into an honors thesis, Paul is also looking for ways to expand Dear Hope. He would like to create a separate platform, We Must Be Broken, continue it as the community-driven website, and then have Dear Hope become a parent website. Under Dear Hope, he plans to launch a secondary education program for students as an assembly to discuss mental health and to educate them on different mental health topics.

Paul also launched a YouTube channel, where he plans to interview people living with mental health issues and have them discuss their experiences. He’d like to focus on musicians. “There’s a lot of potential to grow,” he says.

Someday, he would like to display the finished Consumed series featuring diverse models in a gallery. He also hopes he can turn Dear Hope into a career to support himself. If not, his goal is to find a job that allows him to help others in any way possible.

How does Paul feel about the attention that Dear Hope is gaining?

“I didn’t — and still don’t — know how to take praise very well,” he says. He’s a humble person who speaks with authenticity and sincerity; he once championed to work with student veterans to create a veterans’ lounge on campus simply because he believed in the cause. “I’m extremely self-critical, and the result is this meta feeling of knowing that you made an impact on someone’s life, or possibly hundreds of lives, and not knowing if you deserve that.”

Dear Hope‘s readers know that Paul deserves it. “You are loved” is his blog post sign-off, and he’s created a community that loves him — and Dear Hope — in return.

Alaina Leary, Germ's Style Editor, is a native Bostonian currently studying for her MA in Publishing and Writing at Emerson College. She's also on the creative teams at Luna Luna Magazine, We Need Diverse Books, Germ Magazine, and a few others. Her work has been published in Cosmopolitan, Seventeen, Marie Claire, BUST, Redbook, Good Housekeeping, AfterEllen, and Ravishly. When she's not busy playing around with words, she spends her time surrounded by her two cats and at the beach. She can often be found re-reading her favorite books, watching Gilmore Girls, and covering everything in glitter. You can follow her on Instagram and Twitter @alainaskeys.

Writing as an Outlet: An Interview with Tonya Ingram 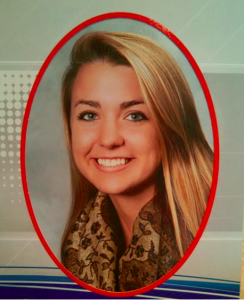