We all care for you on a deeper level than seen, and yet here you are ungrateful for what’s in front of you. I understand it’s your mind that’s manipulating you, but you don’t see how pointless it is? Look around you. Do you like what you see? All of your friends crying and telling you not to. Yet, you still keep saying those goodbyes. It hurts. It hurts like Hell. I get it’s you against your mind, but this? This is stupid. Yes, I am judgmental, but this is just unrealistic.

We are all stuck in the clouds and don’t know what reality feels like. That’s a feeling we feel when we’re older not in age, but in mind. This is the point where “You’ll understand when you get older” takes place, and guess what? None of us are older. Not even the oldest man on Earth is older. Why? Because us puny humans think we know everything. Every single theory, idea, fact. We act so superior when we suck. We value life, culture, love, but we don’t value the people around us. We end up looking at the environment when the people are the environment. What is the point? A rhetorical question. I could mean specifically you or the whole universe. I mean the in-between. Why is it all of a sudden you against the world? Don’t become a broken umbrella.

You always talk with such exaggeration. It’s so obvious that you haven’t grown out of your skin yet. You haven’t found the answer. You might be asking, the answer to what? Well that is for you to find out for yourself. Every person has that one moment in their life where they stick to this belief and it keeps them going. It’s kind of the idea where each person follows their own moral. It’s so obvious that you haven’t found yours. You try to keep distracting yourself so you can’t sit in an environment and truly think and process your thoughts. For example, I found my “answer” on the train in a completely different country surrounded by strangers. My reason for existence is grasping reality.

Before you ask, no I am not mad at you at all. I am simply curious and stubborn to get an answer from you. A lot of us have been through typically the same thing. We know what might be running through that mind of yours and your reaction. If we’ve been there, then we know it, so please, stop acting like we don’t.

Everyone experiences different things at different points of their lives. Take a relative dying as an example. Someone close to me might have lost one of their parents whereas I might lose my parents in 32 years. Who knows? But the emotions from both would most likely be similar. My friend might have had their parents divorce and lost privileges to seeing a parent whereas I could lose my parents in a car crash. My point is different situations happen to different people, but the general idea of what happened could relate and the reactions and emotions could generally be the same.

I try to never talk about myself. I will talk about myself in the present and maybe in the future, but I never talk about myself in that past. You know, that time of your life where you hate yourself and just want to burn those memories away? It’s not that mine was horrific, it’s just it affected who I am today greatly and I still can’t figure how I feel about that. So I simply look forward. Never too far ahead, though, otherwise you get your hopes too high up and then you grow only to be disappointed. I never get involved in drama. I simply choose not to because 1) it’s stupid, 2) I know where it leads to because it’s so predictable, and 3) what’s the point? That question has popped up a lot in my life recently. I was reading a book and it stated in bold, “What’s the point?” And now it’s all I ask myself before I enter into anything social. Sometimes it’s for the fun of it, but others I just simply ignore. So, what is the point?

Humans are born neutral. Not sad. Not happy. Nuetral. We only act happy or sad when it is a happy or sad moment. Same thing with our demons inside us. The demons swarm around us like the darkness around a star. The star still shines bright and slowly dies out of old age until it is swallowed whole by the darkness. The star does not give out, it is the darkness that gives in. The stars are surrounded by darkness. Each individual star has darkness swarming around it ready to swallow it but if you look closely, each star has that bright light coming off from the middle, making sure the darkness doesn’t take it. Our light does fade or break in time but that is why we try to shine our light and make the most of life because this is our only life. We focus on the present. Not the past. Not the future. The present. The past is the past, and you cannot let it become your present or future or you’ll be consumed and slowly erode away into the abyss of pitiful darkness.

Some feelings are so strong that they are indescribable. That is this feeling. The feeling of how your brain automatically thinks of what you have done wrong and punishes itself. You are usually in control, but in that moment your brain takes the wheels and steers you to Hell.

See, the thing is: You have to be realistic. Some people are too naive and oblivious to see how ignorant they are. If you look around you, the world is messed up. You were never the one who was messed up. You were probably normal considering you realized the stupidity that rules this world.

The human race thinks they’re all superior and perfect. HAH, what bull. We think we know what goes on in each other’s minds, yet all we do is make assumptions and be the dumbest creatures on the planet. We all just have to start drama and see who is gullible enough to believe it. We tell each other to play fair, but when people turn around, we make our way to make rumours that are ridiculous; but, miraculously, some people are just that naturally stupid.

The key to life is to never get so worked up over one small event in your life and to discover the answers. I call it The Key. This key is what helped me recover slightly. It’s so hard to describe, but it’s the general idea of collecting your mind and bringing a broad idea to a simplistic thought that sticks with you and you choose to put it to action in your life. Take the idea of an average human having a 50 to 50 chance of being right from wrong. Specifically, though, if you look at the content of the person’s character, they could have a different ratio of being correct to inaccurate. It’s the concept of how each human mind, body, and soul all have different characteristics that define you to be you and make you unique in your own way.

Younger self, find The Key and live. 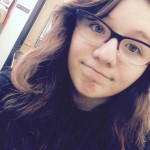 Marie (Mars) Florov is a Chicago-born, short nerd complete with braces and glasses. When she isn’t reading or writing, Mars spends her time with friends playing video games. Mars enjoys many sports, such as rhythmic gymnastics and downhill skiing, and she loves to be outdoors. She hopes to one day be a tall and successful woman who inspires the people who surround her.