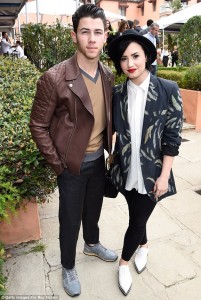 Pop singers Demi Lovato and Nick Jonas announced May 26 that they are partnering together — along with music industry powerhouse Phil McIntyre — to create a record label called Safehouse Records. Safehouse Records will apparently favor artists over record labels, making it artist-centric. Along with Island Records and Disney-owned Hollywood Records, Safehouse Records will release Demi Lovato’s fifth studio album, which she is currently recording. They are also looking to sign new artists and to release Nick Jonas’ next album, which he has yet to announce.

Lovato is incredibly excited about her new business venture, stating that her label signing was the best day of her life. She has also credited Phil McIntyre — her manager and now business partner — for saving her during the time when nobody else believed she could rise above her alcoholism.

“When so many others had given up on me, he never did. He told me he cared too much about me to watch me self-destruct…therefore at the very end of my drinking and using he gave me one last chance.. Get sober and he’ll stay, or he’d have to leave. He did that out of love. Not out of a money hungry I-don’t-give-a-fuck-about-the-artist kind of way… But he cared so much that instead of being the kind of person in this industry who could care less about my well being and continued to make money while I was spiraling, he stood his ground and said ‘If you do this I will fight this battle with you every step of the way.'”

As for her partnership with both Nick and Phil on the label, Lovato had this to say:

“I’ve worked closely with both Nick and Phil for years and we share the same point of view when it comes to making music. It’s incredibly exciting to be part of this new company where I’m in control of all aspects of my career. I can’t wait to share what we’re working on!”

Demi Lovato and Nick Jonas are both signed under Island Records and are known as best friends in the industry. There is no current news about the newly created Safehouse Records, but it is likely that they are looking for new talent. Artists making a business out of putting out their own labels is truly a turn for the music industry, and album sales are waning for recording companies. Safehouse Records, then, just might be something that we need right now.