Everyone loves a good scary story, and scary stories about  dolls (those Annabelle trailers have scarred me for life), witches, and things going bump in the night are the most popular forms of storytelling during this month of spooky festivities.

For this month’s Badass Ladies in History segment, I shed some light on the background of the real creator of Dr. Frankenstein’s monster, Mary Shelley, and her motivations in creating what we all have come to know as the “classic” scary story told during Halloween: the story of Victor Frankenstein and his obsessive need to create human life. As said in the article, there have been several adaptations of this famous scary story ranging from live theater play productions to a variety of films dedicated to Frankenstein’s monster. All have their merits and significant contributions to the re-telling of this famous story, but none has had such a unique impact as Frankenstein’s story being told via web video.

In mid 2012, popular YouTube content creator Hank Green and producer, director, and writer Bernie Su came together to create the Emmy award-winning web series The Lizzie Bennet Diaries — a modern adaptation of Jane Austen’s famous and most beloved novel, Pride and Prejudice. The web series was filmed in a popular internet style known as “vlogging” (or video blogging for those living under a rock since 2007), and it told the story of Lizzie Bennet, a 20-something grad student faced with “a mountain of student loans” and a mother determined to marry her off.

What was so unique about this form of storytelling was the fact that the characters, by all standards, were “real” to the audience. They had Twitter, Facebook, and Tumblr accounts that were updated almost daily, and they interacted with their audience via re-tweets and question-and-answer videos, much like any other “real” vlogger on YouTube would do. People unaware of Austen’s story truly believed that Lizzie Bennet, her two sisters, and their love interests were all real people rather than modernized versions of a Jane Austen classic. Because of the popularity of Lizzie’s story, Hank and Bernie teamed up again to create two more modern adaptations of Jane Austen stories: Welcome to Sanditon (Austen’s unfinished novel) and Emma Approved (based, of course, on Emma).

The successful web series producing team, now known as Pemberley Digital, has recently come back to introduce a new series to its viewers. This time around, they’ve said goodbye to the fabulous Austen universe and instead have said  hello to Mary Shelley’s world of Frankenstein. Their web series, Frankenstein, MD, follows the life of young Victoria Frankenstein, soon-to-be MD,and her partner, Iggy DeLacey, as they conduct experiments in their university lab and post it online as a science show. 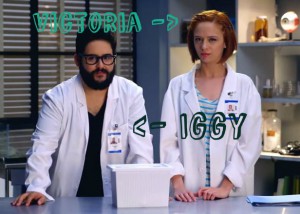 The Pemberley Digital team keeps traditional hallmarks of the novel throughout their show, such as Dr. Frankenstein’s ambition, pride, and absolute obsession with bringing the dead back to life. They do, obviously, make changes — the largest of which being the gender-bending that happens to the protagonist and his love interest. Victor Frankenstein becomes Victoria Frankenstein in this modern adaptation, and Elizabeth Lavenza, Victor’s future wife in the novel, becomes Victoria’s good friend Eli Lavenza.

The story of Victoria Frankenstein is currently being aired online, and it is sponsored by PBS Studios. So far, it’s been so much fun to watch. Even the storytelling is an homage to the frame narrative of Shelley’s novel: Instead of Robert Walton writing letters to his sister of his adventures and meeting Frankenstein in the Arctic, the modernized, adapted Robert Walton is instead the camera man who edits and shoots the show/story being told in the lab. Although the adaptation takes certain liberties on this classic tale, the themes remain the same. Victoria’s refusal to name her creature (or at least give it its old name back) has led the creature to a life of loneliness and unhappiness, which ultimately causes the strings of deaths in the novel. As of now, the creature in Frankenstein, MD is wandering “Geneva” (Victoria’s hometown) and has claimed its official first victim. It will be interesting to see where the story creators take their adaptation next, and the death toll that the creature is about to ensue is just in time for Halloween.

Frankenstein, MD comes on every Tuesday and Friday on YouTube, and I highly recommend checking this web series out as well as all the rest of Pemberley Digital’s earlier content. The acting is superb, the comedic relief is genius, and the story — although told and re-told many times before — has found a fresh new take in the form of this web series. Hope you all enjoy, and Happy Halloween!