There are certain rules to texting. Don’t threaten, don’t bully, and don’t send naked selfies to your father.

This week, twenty-three-year-old Nyjah Cousar went from unknown Inglewood, California girl to web celebrity after she accidentally tweeted a photo (meant for her boyfriend) of… well, let’s just say of herself… to her dad, and then recounted the entire play-by-play on Twitter.  With video. 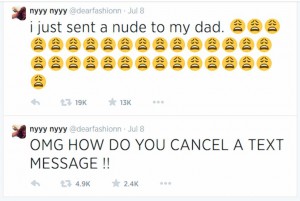 Some are saying it’s a publicity stunt (there are rumors she’s been offered her own reality show). Some are saying Jimmy Kimmel’s behind the prank (what?).  But according to Nyjah’s friends, that’s just Nyjah being Nyjah.

Okay.  Seriously?  I’m no prude.  I’ve had boyfriends I thought I would love forever.  I’ve had friends I thought I’d be friends with forever.  But sometimes things change.  And at the end of the day, my mom raised me to respect a certain school of thought.  Never write or photograph anything you don’t want printed on the front page of the New York Times.  Because once it’s documented, it’s documented, and you never know where it might end up.

To all you Nyjah’s of the world, stop and think before sexting.  Imagine three people in your life you would never ever want to read/see what you’re about to send out there.  And then don’t do it.  Or at the very least, triple check the name of the person you’re sending it to.