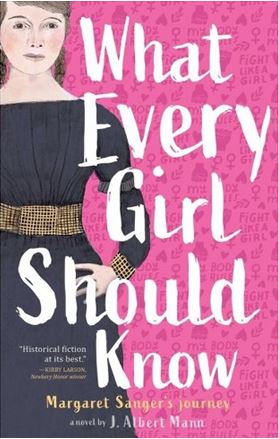 What first inspired you to write historical fiction, specifically for young adult audiences?

YA and historical fiction are a perfect fit because so much in life depends on the experiences we have when we’re teens, and this includes historical figures. People who end up doing amazing things often do them in response to their childhood. Margaret Sanger is no exception. She pursued birth control because she watched her mother’s body suffer through 18 pregnancies, a fact that helped put her mother in an early grave. This tremendous life event set Sanger on her activist path.
.

What compelled you to tell Margaret Higgins Sanger’s story?

I was driven to tell Margaret’s story in response to an incident which took place in my life during my sophomore year in college. I was invited home to dinner by my (then) significant other. Arriving at his very posh parents’ brownstone in lower Manhattan, I remember noticing a historic plaque on the outside of his home; but, the combination of feeling shy about my middle-class Jersey roots, general nervousness regarding the meeting of his parents, and the naivete of figuring all rich people probably had these kinds of things attached to the front of their houses—I did not stop to read it. Following dinner, his stepmother suggested he take me on a tour of the house, specifically mentioning the basement. Winking slyly for only me to see, he grabbed my hand and headed for the basement door. We descended and began to “tour” the basement… on a strange table… with gynecological stirrups? Stopping mid-tour, I sat up and asked where the heck we were. His breathless answer: Margaret Sanger’s first Manhattan clinic. My sad response: Who is Margaret Sanger? Oh, the irony—half-naked in her old office using the very privilege (birth control) she handed me, I had no idea who the woman was. I’ve since corrected this oversight and have been a fan of hers ever since. This novel is my tribute to Sanger and her lifelong social activism, which in turn gave me a lifetime of choice.
.

Your book deals with heavy (and important) subject matter, such as Margaret’s difficult family situation and feminism. What do you hope teens learn from your historical account of Margaret Sanger?

I hope teens will take away a little piece of the strength that Margaret exhibited during her own teen years when it seemed nothing could go right. Especially those teens experiencing tough family situations. Margaret held on to who she was. Hold on to who you are. It’s one of those very simple things to say but an amazingly difficult thing to do.
.

How did you go about researching Margaret’s story? Did you find it easier writing What Every Girl Should Know compared to your previous release, Scar?

I love research! There is something so fun about poking around in a single subject until you know everything you can about it. My favorite part is meeting the people who are spending their lives working and writing in that single subject. They’re always extremely passionate, and I can’t help but catch their energy like a cold. Researching and writing Scar was a different experience than Every Girl in that the event (the Battle of Minisink) was given to me by history, but I was able to “make up” my main character to stick into that historical event. With Every Girl, I was given both my main character and the events, which might sound like it would be easier… not having to make things up. But it was much more difficult. I had to fully and completely understand Margaret—and not just who she thought she was, but who her sisters thought she was and who her neighbors thought she was and her friends, co-workers, historians, etc. Because none of us are just who we think we are; we’re also who others believe us to be.
.

Can you share with readers what role What Every Girl Should Know has within Feminist YA literature and how the themes presented are still relevant to women today?

What Every Girl Should Know is the only work of children’s literature about Margaret Sanger, so I believe it’s very important. Sanger’s childhood led her to wage a lifelong battle for birth control, which in turn changed the entire world. The strength she showed in the face of immense opposition will always be relevant to women as well as to all marginalized people. Meanwhile, the rights she fought so hard for are still being contested. For example, our current president is attempting to cut off access to contraception and abortion under the Affordable Care Act (ACA) by giving companies and institutions the ability to use religious objections as grounds to deny coverage for basic reproductive care.
.

Which authors or books have been the most influential to your writing?

I read a lot. I also read widely in both fiction and non-fiction and across genres. Which of these books or authors influenced me most is not a question I can answer. Specifically when it came to Margaret Sanger and What Every Girl Should Know, my most important influences were Sanger’s own autobiography and Ellen Chesler’s stunning biography of Sanger, Woman of Valor.
.

What is feminism to you? What does it mean to you personally, and how does it influence your outlook on politics and current events, specifically in “Trump’s America”?

Feminism is the fight for the social, political, and economic equality of all genders and all races. All being the key. Our president would have us believe that if someone else gets something (a job, immigration status, healthcare) that this takes something away from us. This simply isn’t true. We can all have jobs. We can all have healthcare. We can all be seen as equals. There is a beautiful dignity to all.
.

In what ways can girls continue to pave the path for future generations and make an impact as Margaret did?

Are you currently working on another book? If so, what details can you share with readers?

I’m working on an Untitled novel about the first hospital for mental, intellectual, and physical disabilities for children—the Massachusetts Hospital for Idiotic and Feebleminded Youth. It was opened c.1850, and although it did change its name in 1924, it operated continually until 2014. I was born with a physical disability, and because of this, the rights of the disabled hold a special interest to me. The history of disability in the United States is almost exclusively told through the voices of the abled. This needs to change.
.

In conclusion, what advice do you have for aspiring teen writers? Is there anything specific to non-fiction that you can suggest?

Read. Write. Live. These three things are what make us better writers. To all the non-fiction writers out there… this is your moment. There is an explosion of exciting non-fiction happening in the world. Jump in there. Be one of those passionate people I spoke about in answer #4. I can’t wait for the day where I’m digging around in your subject and bump into you!