While Fred Astaire and Ginger Rogers charmed audiences across the globe with their silver screen dancing, Brazilian dancer Carmen Miranda wowed people with her colorful performances. Since the 1940s, Hollywood cinema has been fruitful with a variety of stars, but there hasn’t been another dancer like Miranda. The Brazilian native wore extravagant costumes, danced the samba, sang, and was the highest paid woman in Hollywood in the 1940s.

This month we look at the colorful life of Maria de Carmen da Cunha — famously known as Carmen Miranda.

Born in Portugal on February 9, 1909, she and her family moved to Brazil, where her father worked in the produce business, and they settled in Rio de Janeiro.

Miranda rose to fame at age 15 in Brazil when the country’s music industry was booming. In fact, she became a Brazilian music icon and sold more records than anyone else. While she was singing at a casino in the Urca neighborhood, American producer Lee Shubert noticed her and took her to work on Broadway. Once there, Shubert signed her to his Broadway musical production The Streets of Paris in 1939, where she became a star. 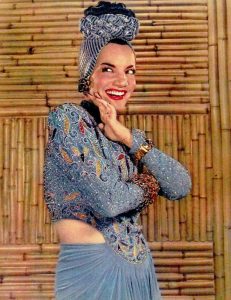 Following her Broadway success, Shubert took Miranda to Hollywood, where she received a movie contract with 20th Century Fox in 1940. She debuted as an actress in the film Down Argentine Way, which brought her much success like her performance in the musical theater the year before. Miranda made a total of 20 film appearances in her career, including the successful musicals That Night in Rio and Weekend in Havana, both from 1941; Springtime in the Rockies (1942); If I’m Lucky (1946); Copacabana (1947) with Groucho Marx — where she met the film’s assistant producer, David Sebastian, and married him that same year. Her last film appearance was in 1953’s Scared Stiff.

Americans cheered and marveled at Miranda’s voice and the way she danced her native samba in brightly colored costumes. Brazilians, however, did not approve of her success. People in her native country said she was a “sellout” — somebody who let herself be used to insult the Brazilians. As a result, when she returned to the Casin da Urca to perform the following year, the audience gave her a “bad experience” that caused Miranda to stop the show.

After the experience she had back home, Miranda recorded a song in 1940 that translates from Portuguese as “They Said I Came Back Americanized.” It became a huge hit at the time, and she did not return to Brazil for 14 years.

Carmen Miranda’s iconic look consisted of fruit stacked on a headpiece, large earrings, bangle bracelets, and colorful and glitzy dresses that revealed part of her abdomen. Carmen Miranda said her style was inspired by the women she saw back in Brazil. 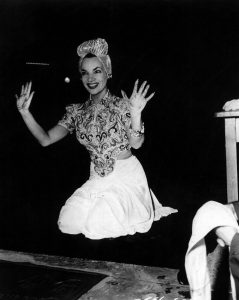 “In Brazil in Bahia, the girls carry the basket with the fruits on her head, and they have big bracelets and big necklaces and they sell fruits in the streets and I take it from the girls,” Miranda said in a 1948 interview.

Similar-looking hats and platform shoes like the ones Miranda wore were sold across the world, and many people learned the native dance of Brazil thanks to her. In 1941, she got her hands and feet imprinted in front of Grauman’s Chinese Theater in Hollywood, and she got her own star on the walk of fame in 1960.

Miranda’s signature performance has become “The Lady in the Tutti Frutti Hat” — the scene from the 1943 film The Gang’s All Here. In the performance she is wearing the iconic hat topped with bananas and strawberries while female dancers wave around giant bananas. Other songs she made famous were “Down Argentine Way,” “Chica Chica Bom Chic,” and “I Yi Yi Yi Yi.”

In 1955, the actress was up late at night filming for a comedy TV show with Jimmy Durante, and afterwards she invited some of the cast and TV crew to a small party at her house. She entertained them with dancing and singing, and by 3 am she prepared for bed; but, she fell in the hallway, where she was found dead the next morning. Miranda died of a heart attack at the age of 46 in her Beverly Hills home.

Carmen Miranda brought her native country’s dance, her lyrics sung in Portuguese, and her colorful wardrobe for American movie audiences to admire. Hollywood was fascinated by her charisma and entertaining talent, and to this day new generations have discovered her performances and have fallen in love with the lady in the tutti frutti hat.