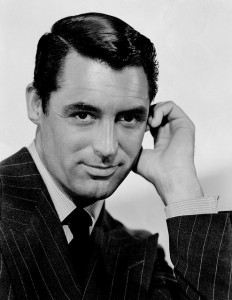 From 1932 to 1966, Cary Grant dazzled audiences as they watched him on the silver screen. Throughout his career he’d been called dapper, charismatic, and talented, and he was viewed as the living definition of a true gentleman. And, to be honest, he’s still known around the world for those things today. For all these reasons and more, Cary Grant is this month’s Old Hollywood Spotlight.

Born on January 18, 1904, in Bristol, England, Cary’s birth name was actually Archibald Leach. (Almost 30 years later, he would adopt “Cary Grant” as his stage name.) While Cary worked hard to craft a persona that kept his personal life separate from his career, there are still some things known about his past.

For instance, when Cary was a child, his father moved to Southampton for a new job and a new life, leaving him and his mother behind. When Cary was 10 years old, though, he suddenly found himself alone in the world; his father told him that his mother had died, and his father did very little to help Cary. In truth, Cary’s father had Cary’s mother institutionalized — an act that would greatly affect Cary for the rest of his life once he found out the truth.

When Cary was 13 years old, he joined Bob Pender’s theater troupe and immediately felt at home. He was forced to quit, though, because his father insisted that he go to school. After a year in school, he was expelled, giving his father no other choice but to allow him to rejoin the troupe. From there, Cary spent 2 years with the troupe, “performing in all types of acts from juggling to comedy bits to acrobatics.” In 1920, a chance to visit New York City with the troupe inspired Cary to leave the group and pursue a theatrical career in America.

At first, Cary found some success on Broadway, but it was his leading role in the 1931 Broadway musical Nikki that helped jump-start his career. When the musical ended, he appeared in the short film “Singapore Sue” — an appearance that attracted the attention of agents in Hollywood. With a possibility to further his career, Cary left New York and moved to Los Angeles.

Once in Hollywood, it didn’t take long for Cary’s star to rise. His film debut was in the 1932 movie This Is the Night, but it was his starring role in the movie Topper (1937) that made audiences really take notice.

While most actors were regulated to either dramas or comedies, Cary could do them both, and he could do them extremely well. In fact, he’s left behind a film legacy that encompasses almost every movie genre; from suspense to romance, from slapstick comedy to drama, Cary could do it all. While it’s impossible to condense all of his popular works into a single sentence, some of his famous works include: The Awful Truth (1937); Bringing Up Baby (1938); The Philadelphia Story (1940); Penny Serenade (1941); Arsenic and Old Lace (1944); The Bachelor and the Bobby-Soxer (1947); The Bishop’s Wife (1947); Monkey Business (1952); To Catch a Thief (1955); North by Northwest (1959); and Charade (1963).

In 1966, Cary filmed his last movie, Walk Don’t Run. That same year, he became a father for the first time in his life with his fourth wife, Dyan Cannon. Wanting to focus his attentions on his family, Cary retired from acting. However, Hollywood never forgot him, and he was honored in 1970 with an honorary Academy Award for “his unique mastery of the art of screen acting.” In 1981, 15 years after his retirement from acting, Cary received the Kennedy Center Honor for Career Achievement in the Performing Arts.

Sadly, on November 29, 1986, Cary Grant passed away from a cerebral hemorrhage caused by a stroke. He was 82 years old.