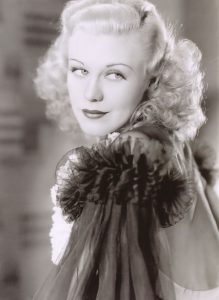 There’s nothing better than a great musical film with spectacular dancers and a good storyline to take your mind off the Great Depression of the 1930s. Film was one of the favorite pastimes of Americans, and Hollywood created an escapism with classics, including Flying Down to Rio, Roberta, and Top Hat. What do these films have in common? The dynamic dancing duo of Fred Astaire and Ginger Rogers, of course!

This month we look at the life and career of the dancer and actress who rose to movie stardom as Astaire’s partner: Ginger Rogers.

Before she was the charming actress and iconic dance partner of Fred Astaire, Ginger Rogers was born Virginia Katherine McMath on July 16, 1911, in Independence, Missouri. Her parents separated after she was born, and when her mother married John Rogers in 1920, Virginia McMath took his last name as her own. But, where did the name Ginger come from? As a child, she had a cousin who couldn’t pronounce Virginia, so she called her Ginja. Virginia McMath became artistically known as Ginger Rogers when she became interested in show business, thanks to her mother who worked as a scriptwriter.

As a teenager in 1925, Rogers won the Texas State Charleston Contest and a four-week contract on the interstate circuit (theater). She appeared in vaudeville acts at age 17 before getting married in 1929. Marriage, however, was “a mistake” as she came to realize after three months, but that didn’t stop her from continuing her joy for acting.

Rogers got herself an agent and appeared in the Broadway production Top Speed in 1929 before transitioning to short films, including “A Day of a Man of Affairs” (1929), “A Night in a Dormitory” (1930), and “Campus Sweethearts” (1930). Her first job in a major film was in Young Man of Manhattan (1930), which starred Claudette Colbert and Norman Foster. Colbert and Rogers played flappers who sought the attention of their journalist boyfriends.

Soon, greater acting roles followed: Office Blues (1930), The Tip-Off (1931), and Gold Diggers of 1933 (1933), which established Ginger Rogers as an actress who “enamored audiences.” From there, audiences were eager to see more of this new star who had charmed them while singing “We’re in the Money.”

Throughout the 1930s, Rogers was adding movie credits to her name by appearing in many more Hollywood productions. She worked in 10 movies that were released in 1933, including 42nd Street with Dick Powell, Don’t Bet on Love with Lew Ayres, and Sitting Pretty with Jack Hayley (who later played the Tin Man in The Wizard of Oz). These roles took Rogers closer to stardom as she acted alongside popular actors of that time, but none of these male actors made the perfect on-screen partner like Fred Astaire would.

Ginger Rogers’ major success came when she became half of the dynamic dancing couple that American audiences grew to love. She was paired with Fred Astaire in their first of many movies together. Their first production was Flying Down to Rio (1933), and even though they were supporting actors, they demonstrated magnificent footwork together. The 22-year-old actress had charmed audiences, and she was eventually paired with Astaire again, but this time for their first starring roles in The Gay Divorcee (1934). The Rogers and Astaire chemistry reappeared on-screen in 1935’s Roberta and Top Hat and in 1939’s The Story of Vernon and Irene Castle. In total they made 10 films together. Their last duo project was in 1949 when Rogers stepped in for Judy Garland in The Barkleys of Broadway.

The joyous scenes from these movies allowed audiences to escape from their everyday troubles, especially the Great Depression. Unlike their lives in the 1930s, cinema gave viewers an escapism that was the opposite of their worries. Music, dance numbers, party scenes, and love stories made Americans have hope about the future, and Ginger Rogers was part of that Hollywood goal.

The success of pairing Rogers with Astaire made movie executives push the actress further into stardom. She had finally become a star that charmed audiences, so wanting to play even bigger roles by herself was in Hollywood’s plan.

“I’d do three or four pictures between those I made with Fred. We weren’t Siamese twins. I always wanted to stretch out and do some things as me, alone, by myself. I did, and among the things was Kitty Foyle.” —Ginger Rogers

Kitty Foyle (1940) provided Rogers with the leading title role that eventually won her an Academy Award. The following year she played another lead role, this time in the comedy film Tom, Dick and Harry. She continued to act through the ’40s and ’50s, but her success had not been the same prior to World War II. Two of Rogers’ last films were Oh, Men! Oh, Women! (1957) and Harlow (1965), where she played the mother of Jean Harlow. Afterward, she returned to acting in theater plays.

Rogers married five times, was a devout Christian Scientist, and was said to be conservative about her political beliefs.

After a successful career in theater and film, Ginger Rogers retired in 1984. She wrote her autobiography, titled Ginger, My Story — which was published in 1991. At the age of 83, she died of natural causes in Rancho Mirage, California, on April 25, 1995.

As a teenager who became a Charleston dancer and transitioned to theater and then Hollywood’s silver screens, Ginger Rogers was an actress who gave hope to audiences with her charming looks and her entertaining acting roles. Rogers had her own acting credits, but she is best known as the dance partner of Fred Astaire. Together they became one of the greatest duos of cinema.

“The only way to enjoy anything in this life is to earn it first.” –Ginger Rogers