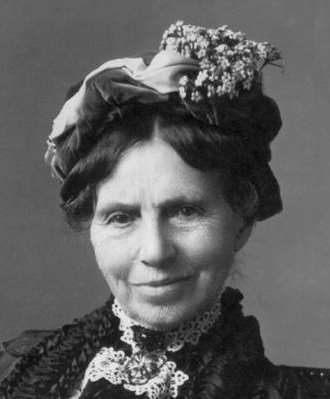 Clara Barton was born in 1821 in Oxford, Massachusetts. She first showed an aptitude for nursing as a young girl in Massachusetts when she took care of an older brother for two years after a serious accident. At that time in America, women tended ill family members but had no opportunity for professional training as nurses.

In 1861, when the Civil War started, Barton was working in Washington, D.C. for the US Patent Office. Barton organized medical supplies for Union troops but had to lobby for permission to deliver them. Officials thought women were too weak to be useful on the war front and would only be in the way.

Finally allowed to help, Barton showed extraordinary courage as a nurse, earning the nickname “Angel of the Battlefield.” She took care of soldiers in the midst of conflict. Once, a bullet flew right through her clothing. After the war, she headed an agency to locate the remains of missing soldiers, and she lectured about her experiences.

Throughout her life, Barton suffered from severe bouts of depression, which led to nervous breakdowns. To recover from one such episode in 1869, she traveled to Switzerland, where she learned about the International Red Cross and its mission to provide neutral medical help in wartime. She joined Red Cross efforts in Europe, and in 1881, after several years of struggle, she established the organization in America. Barton also helped broaden the agency’s focus. In 1884, the International Red Cross adopted what was known as “The American Amendment” to include humanitarian disaster relief.

Barton became president of the American Red Cross at age 60 and was a hands-on leader until 1904, providing support for victims of fires, epidemics, hurricanes, tornadoes, and floods. She personally traveled to disaster sites, even in her late seventies.

Women weren’t welcome
on the battlefield,
not even to bring supplies
or bind bleeding wounds,
before Clara Barton spread her wings
and swooped down with a stamina
surprising to those who made her plead
for the chance to get between
the bullets and the blood.

Adored as an angel, but
plagued by her own demons,
Clara’s spirit only soared
when she could wrap
her wings around others.

Victims of fire, flood, famine,
epidemic, and earthquake
still feel her sheltering presence
in the Red Cross relief
Clara brought to America—
proving forever
why a woman
should never be barred
from the battlefield.