But perhaps they’ve never seen it at that curious moment

when the ground wakes up and yawning drops of

morning stretch across each slick blade.

I get up early every morning when I come back,

finding my way to the back porch

with a cup of my father’s strong brew.

Everyone else sleeps in,

clinging to the quiet for just a bit longer

before the birds and the smell of country ham 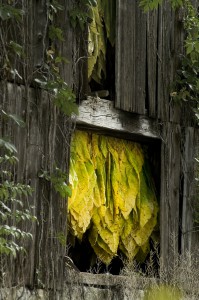 draw them from their rooms.

Settling into my favorite chair with my woman’s bones,

I see with gentler eyes, wide-open.

He came for the stripping season,

when shirtless centurions worked the tobacco 12 hours a day,

cutting leaf from stalk and earth,

leaving the barns bulging with yellow skin hung up to dry.

He was machismo, arrogant and stubborn and

I gave in, every time,

because he was beautiful in the afterglow.

The first time I got a pile of crap in my mailbox,

I thought it was a joke.

But when they wrote “Mexican Slut”

in the dust on my father’s Monte Carlo,

I knew we were not enough for a place

where each race had their own part of town.

We spent our last night by the swinging bridge,

finding that grassy spot just above the crick.

He slept before me, and I rested on his chest,

trying to bury myself in the fascinating curve of his mouth.

The sun rose too soon that morning,

There were words that should have been said,

but by the time we headed back to town,

he was already gone.

This morning, the grass is a lapis-lazuli blue,

warmed by a Sun which touches

but does not burn the sky. 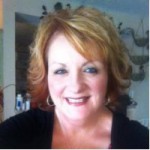 Kathryn J. Cody is a freelance writer living in Lexington, KY. Her work first appeared in Prism, a magazine for gifted students, when she was in the fourth grade. Since then she’s been published by The Listening Eye, Urban Spaghetti, The Pacific Review, Peralta Press, Blood & Thunder, Mentress Moon, received honorable mention in the Best of Ohio Writers competition, and was a semi-finalist in the Bart Baxter award for Poetry in Performance. She won first place in the Community Writers Association International Writing Competition for her poem “Goblin Men,” a piece about eating disorders in young women. She has written articles for AARP.com and short stories, as well as written three novels and has one creative non-fiction work in progress. She has read at numerous venues, most notably the Seattle Art Museum and has led many poetry workshops across the country. In addition to writing, she enjoys singing, swimming, and cooking.