Hello, Germs! I have a love of science-fiction and fantasy, so when I pick out books, I tend to gravitate toward them.

So today’s review is all about Lifesphere INC: Acquisition by Talitha Kalago.  The slightly anime-esque cover pulled me in while the genre and description (along with the price) convinced me to buy it. 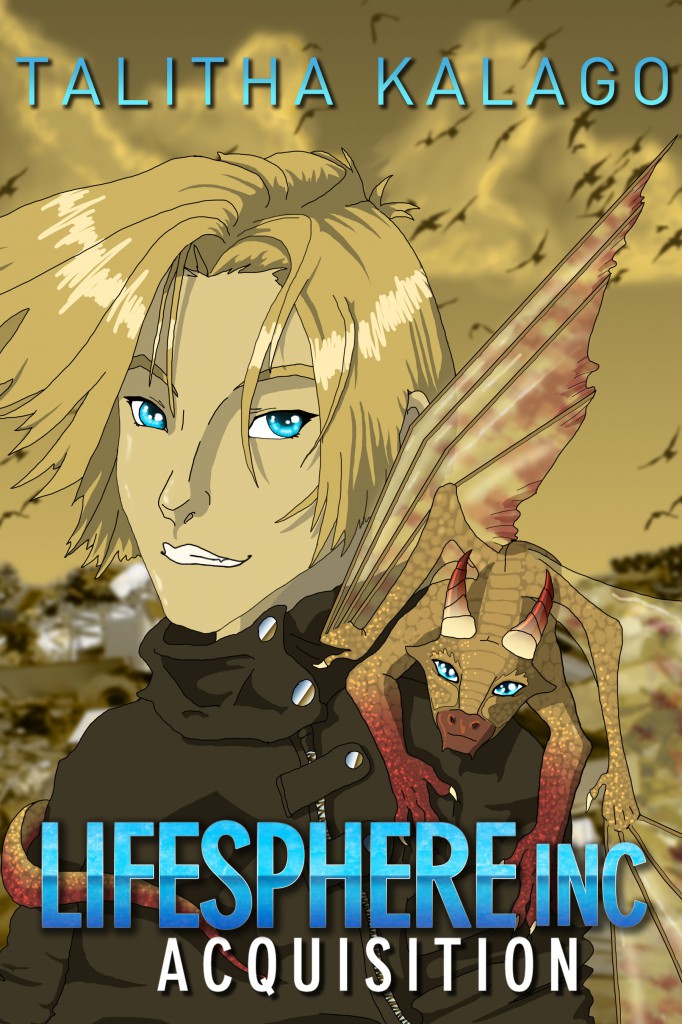 Lifesphere INC: Acquisition follows the story of Eli – an orphaned scavenger living in the Rim.  The story opens with a newscast about a meka, a creature that develops only after it gets a spark of human DNA, which makes every meka different.  The news story states that a meka is attacking an area of town, and they’re considering making the meka restricted to the orange citizenship class and above.  Eli doesn’t take the news well – a meka would be the only way he can get out of the Rim.  One of the people he works with mentions that they heard about someone selling meka.  Eli goes and looks through the Blueline (a step up from the Rim) and meets a young woman named Squall.  She advises him to stop looking, saying that it would be dangerous.  Once he finishes speaking with her, a man approaches him…tells him he can get Eli a meka.  For a deal.  That once the meka has hatched, it will have to fight. To the death.

Stopping there before I spoil anything!

I think it’s more what I didn’t like for this book.  I really liked that the characters had actions that were basically age appropriate.  They made mistakes – which I think is really important for characters who are only thirteen.  Characters aren’t perfect, and younger characters would be more prone to making mistakes.

I absolutely love the concept for this story.  I really enjoy the idea of having a creature that is different because it has your DNA.  I like that humans and meka are linked in a psychic way.  It made me want to know how these creatures were created; it made me want to know their backstory.

Also, I really liked the caste system.  The undercity, the Rim, the Blueline, topside…and up on top there are even more levels to the caste.  It adds another layer of complexity into the story.  Very nicely done.

So, there’s a lot that I liked in this novel, but I found myself disliking how easy some things were resolved.  Eli needed to get an orange level citizenship.  No problem.  They got a backer, and it was resolved.  I wanted there to be more conflict there!  A lot of the main conflicts seemed to get tied up neatly with convenient solutions.

My other main complaint is that the novel ended rather abruptly; there wasn’t much denouement or falling action.  The final fight scene ended, and then after a very small amount of falling action, the novel itself ended.  A little more resolution would have been nice. It’s something I have trouble with when writing as well, so I probably shouldn’t complain too loudly.

This is an excellent YA dystopian sci-fi novel.  I gave it 4 out of 5 on Amazon.com, and I would read it again. I absolutely cannot wait for the sequel to this book to come out.  It’s a quick read and has an engaging narrative.  I think that it would be good for those who are ages 12 and up.  If you like Pokemon and other anime series like Gurren Lagann, I think Lifesphere INC: Acquisition is for you!  It’s free on Amazon Kindle, so why not take a chance?

If you have any questions, or if you’ve read the book and want to chat about it, comment below or shoot me an email at laura@germmagazine.com!

crossposted on my personal blog.