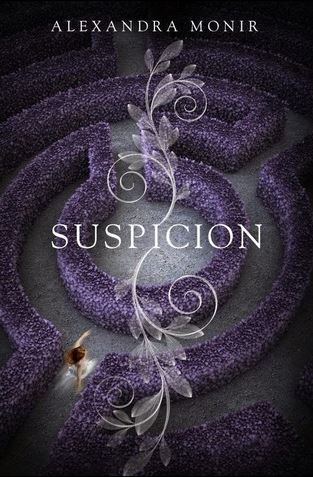 Mysterious. Magnificent. Creepy. Welcome to Rockford Manor. “There’s something hidden in the Maze.”     Seventeen-year-old Imogen has never forgotten the last words her father said to her seven years ago, before the blazing fire that consumed him, her mother, and the gardens of her family’s English country manor.Haunted by her parents’ deaths, Imogen moves to New York City with her new guardians. But when a letter arrives with the news of her cousin’s untimely death, revealing that Imogen is now the only heir left to run the estate, she returns to England and warily accepts her role as duchess.All is not as it seems at Rockford, and Imogen quickly learns that dark secrets lurk behind the mansion’s aristocratic exterior, hinting that the spate of deaths in her family were no accident. And at the center of the mystery is Imogen herself–and Sebastian, the childhood friend she has secretly loved for years. Just what has Imogen walked into?Combining a fresh twist on the classic REBECCA with a spine-tingling mystery and powerful romance, SUSPICION is an action-packed thrill ride.”

Suspicion is like a paranormal Princess Diaries, only it’s also a gothic-thriller. Alexandra Monir, the author of Timeless series, creates a spooky mystery surrounding the Rockford family, who, like every rich and powerful family, have a few skeletons in their ritzy closet. This is also a YA retelling of Rebecca by Daphne du Maurier, which I haven’t read, so no further comments about that. Now, with this book you either love it or you hate it. You can do as I did, which is to ignore all the plot holes and enjoy the story, but it won’t be easy.

Our main heroine is Imogen Rockford – a grand-daughter of the Duke of Wickersham. It’s not her parents who will inherit Rockford and the title, but they are still pretty important. The story starts with 10-year-old Imogen coming to visit her grandfather. All the Rockford family gathers in the manor in England, but the party is spoiled by the big tragedy: her parents and aunt and uncle die in a fire. There is no one left, except for her, her old grandfather, and her cousin, Lucia, who was also her childhood friend. Following the fire, Imogen moves in with her adopted family in NYC, deciding to cut ties with her blood relatives because it’s too painful to think about them.
Fast forward seven years to a 17-year-old Imogen. She’s a typical teenager thinking about graduation and her future, but all her plans collapse when she is informed about the death of the last two members of her family. Now she’s a duchess and expected to move to Rockford Manor. Struggling with her new role, Imogen starts to unravel secrets about her family and herself. Imogen is not one of those characters that seems to come to life from the pages of the book. She has no personality traits, no hobbies, nothing in particular that makes her stand out. It’s as if she was created just to tell the story. The only exception is that she can do magic, which is really not a developed theme in this book. She used it only when it was convenient to the plot, she never tried to train herself, and she wasn’t curious about her abilities. They were based on mythology, but I still don’t understand their extension. (Like, she could control the earth, but since when does this kind of power give you the ability to project a memory on a bush?)
It was told that Imogen moved to New York because she couldn’t bear life in a place where her parents died — which, okay, I can understand that. But, she totally dismissed her cousin and grandfather even though they were her only remaining family. She never called or wrote to them, even on holidays! I can hardly believe that in just one day you can cut the threads that connect you to people with whom you’ve spent your entire life.
Still, it took her only a minute to decide to become a new duchess. It’s unbelievable how easy it was to set up a new heir. Imogen starts her training, visits events like polo games, and invites all the important people to a ball at her estate. It seemed like her new role came to her naturally even though she had never done anything like it before. Coming back to England, Imogen meets her childhood crush – Sebastian. That’s where all the fun stuff starts. She and Sebastian were besties before her parents died, and our girl was deeply in love with him (never mind that she was only 10 years old). But Sebastian was with her cousin, Lucia, making him forbidden fruit. Imogen claims that she never forgot him and didn’t pay much attention to other guys, but she and Sebastian hadn’t talked for seven years and weren’t supposed to meet again. Hilarious! Anyway, it was like for  all those years he was Lucia’s boyfriend, but once she was dead — hip hip hooray — the position was finally available! This annoyed me so much, and there really was nothing to like him for. I can say nothing about his character except that he is good at playing polo. This romance was based on nothing — just another “insta-love” YA relationship.
Nevertheless, I read this book in one sitting. The main reason I couldn’t tear my eyes away from it was the mystery behind the not-so-accidental death of Imogen’s family. There were so many suspects; I couldn’t wait to find the truth! And I liked the idea of a final twist, even though that’s where the major plot holes are. I give the book three stars because, even though there are many cons, I still enjoyed it.