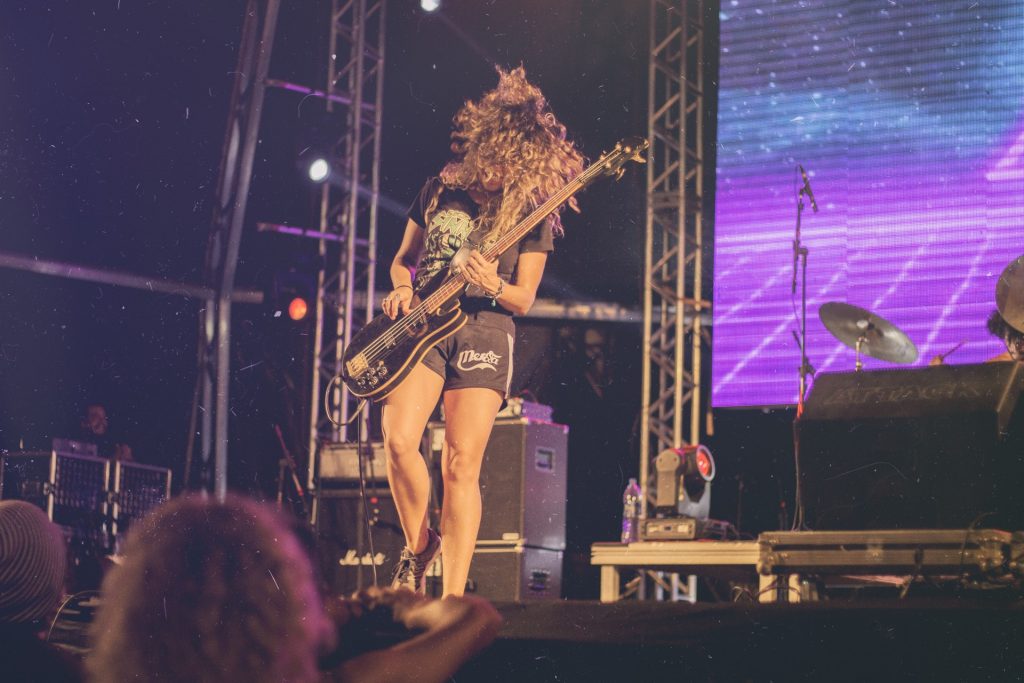 By the time I was electrocuted on an ungrounded stage in San Bernardino, my first band was already over. We hadn’t broken up yet, but the fissures were obvious. Our tensions had been high for weeks, ever since that recording incident or — if I’m being honest — since I began dating our drummer, David, again. It didn’t help that we’d all driven two hours through traffic to play some gig at an empty bar in the Inland Empire.

The slot had been booked by a friends’ band, and I tried to simply think of it as a more official practice. Usually, we just rehearsed in Greg’s, the lead guitarist’s, basement. Greg was the one I’d started the band with the summer before our senior year in high school, the co-writer of all our songs. He’d been my best friend since then too, but in recent weeks he had turned against me — no doubt by that sound engineer or maybe even Henry, our keyboardist, with whom I’d had a brief fling before David came back into my life.

For the record, I hadn’t wanted my ex in our band, but we’d needed a new drummer, and behind my back the other guys hosted David’s secret audition. After some resisting, I finally agreed. David was the strongest musician, and there was no doubt he’d be the best choice. There also probably shouldn’t have been any doubts that he and I would get back together, but I don’t think Henry considered this at the time.

Admittedly, I didn’t consider how hurt Henry might’ve been by the reunion.

Instead, I’d been trying to ignore him. I let every scowl, every sharp comment he hurled in my direction bounce away from me like the wrong end of a magnet. At least this divey bar had a real stage, and I’d be looking out at the empty room instead of across Greg’s basement at Henry. Plus, we had the benefit of a house sound system, which meant someone else perfecting our levels — except what was taking that guy so long? The feedback was bad, and the monitors weren’t working, and when I stepped up to test my vocals, left hand resting atop my guitar’s strings to stop the buzz, I simultaneously reached out with my right to adjust the angle of the mic — a thoughtless gesture I’d made hundreds of times before.

But this time was different.

This time, I couldn’t let go.

I didn’t know anything about electrocution at the time, except that scene in Jurassic Park where the kid gets zapped and flies off the fence as gracefully as a tossed ball. But I didn’t get flung across the room. In fact, I didn’t move at all. I felt physically paralyzed, unable to scream for help, incapable of releasing the mic and stopping the electric current that thrummed through me. My mind swam with fear. Time seemed to stop.

And then Aaron, our bass player, yanked my guitar’s chord out of my amp, severing the voltage.

I stumbled backward, my left hand still draped across the strings of my guitar, my face blank, in shock.

“What happened?” voices around me asked.

My legs were shaking, my heart beating so hard I thought it might plow right out of my chest. I said, “I think I was just electrocuted.”

That’s when David came out from behind his drum kit, cradled me beneath his arm, and led me from the stage, out to the parking lot. A dusky purple haze brightened the night sky as we sat on the bed of his truck. He asked me if I was okay, and I said that I thought so; but, my heart was still pumping too fast, and my brain was scrambled, and I just kept staring at the middle finger on my right hand, where this impossibly deep and narrow hole had appeared — as though someone had hammered a sewing needle through my skin, right down to the bone.

We didn’t play our set after that. David went back inside and told everyone I couldn’t do it. They packed up our equipment and loaded the cars, and I think the other three guys were somewhat annoyed, maybe even thought I was overreacting. It was my friend from the other band, I remember, who ultimately chewed out the bar’s manager while I held my seat in the back of David’s truck and stared at that tiny hole in my finger, wondering why there was no blood.

A few weeks before that San Bernardino show, the five of us had scraped together as much money as we could find and hired a sound engineer named Jeff to record our album. Jeff was an acquaintance of Henry’s and had offered us a good deal. We’d get five days in his studio — a small three-room structure located in someone’s backyard. All of the instruments were knocked out in two.

On the third day, I began recording vocals. The plan had been for me to do each track five times. After, we’d listen to all the versions and choose the best parts from each one. When we sat down to listen to the first song’s takes, though, Jeff hadn’t even gotten through the second run before declaring we’d found our winner.

He grumbled a bit, I pushed back, and we ultimately listened to all five. What I didn’t know was that Jeff immediately felt like I’d usurped his authority and commandeered his studio. Like I’d shamed him publicly by questioning his judgment.

I’ve always felt that this was, at least in some subconscious way, a result of my gender.

Sometime later, when the song was complete, I went back into the vocal booth to record the next track. I’d only gotten through the first few lines when Jeff stopped the music and, through my headphones, told me to redo it. “You were off key,” he said. “Start over from the beginning.”

I ended up singing the same verse over and over for more than an hour. My worst insecurities rose to the surface, and tears streamed down my face while, unbeknownst to me, Jeff was feeding my live vocals through an auto tune program. Any time a note I sang fell outside a very narrow margin, he would cut me off and make me start again. On the other side of those soundproofed walls, my bandmates snickered alongside him.

But I didn’t know that until later when David told me. He’d been out on a food run during most of the session, and in my headphones, all I heard was the sharp echo of silence as a track cut off, replaced by Jeff’s smug voice saying, “Again.”

At some point, I got through the song, and David and I left the studio, despite the session being only half over. The next day, when we started again, everyone acted like nothing had happened. Jeff turned off the auto tune when I went back into the sound booth. I sang each track five times and didn’t ask to hear any of them.

With the exception of some sacrificed backing vocals, we finished the rest of the album without any more commotion, but it was clear that a line had been drawn through the center of us. David chose to side with me. The rest of the guys, for reasons I still don’t understand, didn’t.

I can’t recall if that show in San Bernardino was the last we ever played. It probably wasn’t, but it’s the last show I remember. After that, my memory skips forward to the moment post-breakup when I tried to sign on to our band’s Myspace page, where three of our newly recorded tracks had been uploaded, only to discover that Greg, Aaron, and Henry had changed the password and turned our page into a promo placeholder for the new band they’d already formed without me.

David and I would form a new band, too. Or, rather, David formed a band that I was part of for a while, until he and I broke up for good. I didn’t mourn the loss of this second band the way I did the first, though, because it never really felt like mine to begin with. Truthfully, no band I’ve been in since has felt like mine, either.

Besides losing two of my closest friends, the hardest part of my first band’s dissolution was that our album was never released. All that work, all that pain and potential, and it never went further than a few burned copies to close friends.

Now, those tracks still live on a dusty old iPod buried at the back of my desk, and every year or so, I’ll pull it out and listen. Over time, the hurt that had become so embroidered with the music — the heartbreak and betrayal and disappointment — has lessened, and this time when I slip in my headphones, I’m surprised to find that those feelings have almost unraveled completely. More than anything else, I feel a sense of awe.

Deep in my gut, I know that I wrote those chords, those lyrics, that the voice bellowing back through the speakers is mine. And yet, the experience feels like it belongs to a totally different person. It’s this disassociation, I think, that allows me to shed the ache completely. That allows me, finally, to just listen.

As the first song slides into the second, I remember how, for a few years in my teens, I did this wild and beautiful thing. I was creative and passionate and unapologetic about my dreams. And I’m proud of that girl. I’m proud of the band she was in. I’m proud of the music she made, regardless of how long it lasted, how it ended, who else heard it. I’m grateful that we recorded at all, because wounds always heal. That tiny hole in my finger is long gone.

Listening to our album, all these years later, this has become the first thing I think: These songs still sound pretty damn good to me. 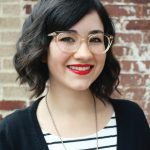 Sarah Nicole Smetana grew up in Orange, California, where she wrote songs, played in a few bands, and successfully pilfered all of her parents’ best vinyl records. She received her BFA in Creative Writing from Chapman University and her MFA in Fiction from The New School. Currently, she lives in Brooklyn with her husband and their three-legged cat. The Midnights (HarperTeen/HarperCollins 2018) is her first novel.