A tourist wandering Kyoto’s historic geisha districts might spot painted women in beautiful kimono flitting to and from ochaya (tea houses). Fascinating and elusive, these women seek to create a secretive and alluring atmosphere for their elite clientele. Yet, in modern day Japan, geisha numbers have decreased from 80,000 in the 20th century to merely a few thousand employed today. So what is it a geisha actually does, and why is the tradition so important to Japan?

To those unfamiliar with modern Japan, the geisha might seem like a main component of Japanese society and culture. The reality is that they “are a mystery even to Japanese” people. This disconnect might be because of the shrinking number of professionals, or it could be due to emphasis by the geisha on rejecting many modern technologies. Either way, despite existing longer than their samurai counterparts, geisha are no longer as prevalent as they once were. 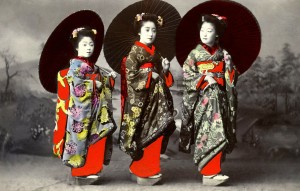 When the geisha first emerged in the 18th century, they were male entertainers assisting courtesans during the Edo period in Japan. Halfway through the century, the first female geisha debuted. Now strictly a female-dominated profession catering to men, these women are celebrated artists and entertainers.

Geisha culture is one of tradition, art, and female prowess. There is a strict hierarchal system that each woman of the profession observes. The okā-san of the okiya — or the “mother” of the house — manages the careers of the geisha living at her residence. Her word is law, and she oversees training and expenses. Under her direction are the more commonly known geisha (or geiko in Japan).

A certain age and amount of training usually must be met before a person may become a geisha. The apprentices of the geisha are called maiko. Many who aspire to become a maiko choose to quit school and begin training in their teenage years. Geisha and their apprentices form sibling-like relationships and commitments to one another that often last a lifetime. The matriarchal hierarchy, in which women dominate all aspects of this profession, starkly contrasts with the patriarchy that they cater to.

Training in traditional arts and entertainment is a vital part of being a maiko and geiko. After all, the word “geisha” is translated to mean “artistic person.” At a kaburenjo — or a geisha school — trainees learn traditional singing, dancing, how to play various musical instruments, calligraphy, flower arrangement, tea ceremony, and hostess duties. In addition, maiko and geiko strive to be living works of art. Their hairstyles, makeup, clothes, and adornments are used to further this goal and to enhance their appeal.

Geisha culture is complex and controversial; but, nevertheless, it’s a vital part of Japan’s history. Watch a traditional geisha dance performance below:

The Importance of Learning Budgeting Skills