As each day stretched me further from the first, I began to think that you never really fall out of love.  I began to think you just learn to feel more things at once. Like, I love you, and I’m leaving. Like, I love you and I left and I’m starting to like someone else. Like I love you and you left and I kissed someone else and now I’m coming home. As if a whole book were one feeling that each word has altered slightly. I mean, like love is a book of a feeling that takes forever to name, like maybe if you could read 36,524 words at once, you’d understand what it means to fall out of love. 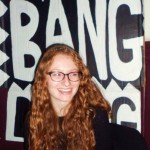 Arielle Trager is a recent graduate of Wesleyan University and a future high school educator. She was coach of Wesleyan’s 2014 Inter-Collegiate Slam Poetry Team, has performed at regional poetry slams in the northeast, and was featured at the Bang Said the Gun Poetry Show in London. Her work also appears in Bitterzoet Magazine.

.
.
.
Amanda Mabel is a fashion and portrait photographer living in Sydney, Australia. Originally from Singapore, she moved to Perth in 2011, then Sydney in 2012. She is currently studying a Bachelor of Arts (Advanced) (Honours) at the University of Sydney. In her free time, she loves taking photographs, travelling to beautiful places, and drinking tea. She also happens to blog for Vogue Australia Spy Style. She maintains a website at www.amandamabel.com and can be found on:  Instagram  Facebook  LinkedIn  Pinterest  Tumblr  Bloglovin Flickr.