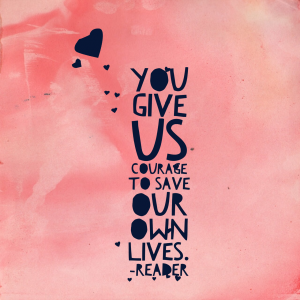 Yesterday — in one day alone — I received 121 messages from readers who wrote to let me know that All the Bright Places in some way saved their lives or made them feel less alone. Because of the book, they have sought help for their issues, learned to look at others and the world in a new light, or decided not to die.

There aren’t words to describe how this feels.

I hear from many more than that weekly. Ever since January, when All the Bright Places came out, response from readers has been overwhelming. I wrote the book because I once loved a boy like Finch, and knowing him was one of the most profound experiences of my life. The book began with this boy and me and the blank page. Even now it is surreal to think of that little story being read around the world. I poured my heart into it.

YA literature is so brave and bold right now, and I love the way authors aren’t shying away from tackling the harder issues that impact teens. But there are still too many books that romanticize things like depression, suicide, and self-harm, and that tie up the story with a pretty little bow. I knew when I was writing All the Bright Places that the most important thing was to be honest. I felt I owed it to myself and to my readers, especially when writing about such a sensitive topic. I also felt it was important to leave them with a sense of hope. 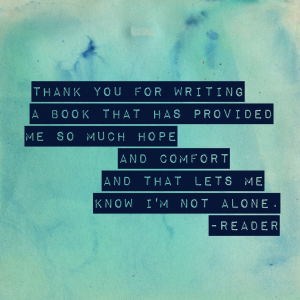 There are some who find fault with the adults in the book for not paying close enough attention to the warning signs of harmful behavior. They dismiss this as being “unrealistic” and “improbable,” and oh, how I wish it were. Unfortunately, the overwhelming message I hear from readers is: no one listens, no one cares, no one notices, I am alone.

Wouldn’t it be wonderful if this wasn’t true and all adults were responsible and attentive?

As with Finch, people — especially teens — can be very good at hiding their troubles. I hear from so many teens who are terrified to tell their loved ones that they have anxiety, that they worry so much they can’t sleep, that they hate themselves and feel worthless, that they want to die. Finch has shown them they’re not alone, that they don’t have to do it on their own. They write letters to him and to me, pouring their hearts out. 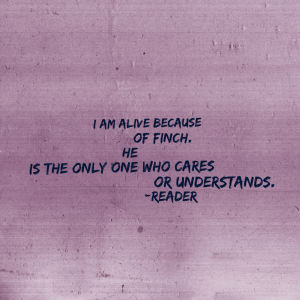 Many of these readers write that their parents/teachers/counselors have told them to stop being so emotional and to “get over it.” I hear from those whose parents/teachers/counselors don’t have time or don’t take them seriously. I hear from others who feel ignored, overlooked, and invisible, leaving them feeling completely on their own. These teens have for the most part found comfort elsewhere — online counseling, friends, a trusted adult who isn’t one of the ones listed above, books. But no one should have to try to handle everything on his or her own, and no one should feel like he has to.

Learn to look for the signs of self-harm, of mental illness, of depression. Some of these signs can include: talking about wanting to die; talking about feeling hopeless or having no reason to live; talking about feeling like a burden to others; worrying about everything; demonstrating anxiety that is impacting physical, mental, and emotional health; sleeping too little or too much; talking about feeling trapped and about having dangerous thoughts; acting reckless or agitated; displaying rage or extreme mood swings; withdrawing from everyone and everything; giving things away and making arrangements; telling friends and family goodbye.

The thing we can do on a larger scale is stop the stigma associated with mental health issues. Let people know IT’S OKAY TO FEEL THE WAY YOU ARE FEELING. Let them know you do not need to handle it alone.

There are adults who have taken issue with All the Bright Places because they don’t think YA authors should write about depression, mental illness, and suicide. They say, “If you don’t talk about these things, they will go away.” 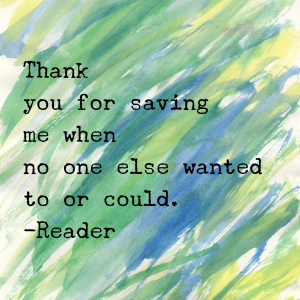 But not talking about something doesn’t make it go away. It makes it get worse.

I understand this can come out of a desire to protect kids, but this kind of attitude is dangerous. It isolates the teen they’re trying to shield. It teaches that teen that it’s wrong to feel the way he/she feels and it’s wrong to talk about it. Those are the kids I hear from daily — the kids of this type of parent. Those are the teens who feel they have no one to turn to, who feel like a burden, who feel like they don’t matter and no one understands them except characters in a book.

So on World Mental Health Day, here is my message:

Learn to listen. Learn to pay attention. Learn to see others, really see them. If someone comes to you and entrusts you with their innermost worries over their mental health, take them seriously. Don’t assume they are crying wolf. Practice patience and empathy. Care. Be Kind. Love. 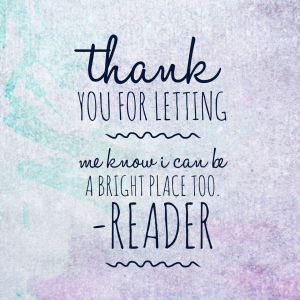 And here’s my message to those who are struggling today and every day:

You are necessary. You are loved. You matter. You are the only you that exists in this world. You are not alone. It is okay to feel the way you are feeling, but it’s not okay to try to handle it all by yourself. Talk to someone you trust — a parent, relative, friend, teacher, counselor. Let them know what you are feeling. Know that even when life is darkest, there are bright places everywhere. You are a bright place.

Why not practice 121 messages of hope, support, and love instead?

Here are resources to help:

International Help for Mental Health Issues from Depression to Suicide