There once was a woman who lived by the sea. 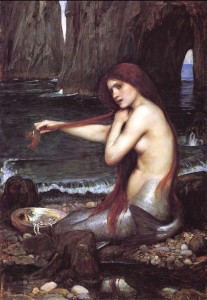 She was not very young, and she was not very old. She made decorative armor out of scavenged fish hooks for the mer-people who lived beneath the water. One day while trading an intricately-wrought chainmail piece, she fell in love with the princess of the mer-people, the daughter of a great king, and a mermaid.

The mermaid was cold, angular, and pale with large, obsidian eyes. She was not beautiful, but she was compelling. The woman was drawn to her. When they made love, the windows and walls of the woman’s small cottage became coated with a layer of moisture, and the woman always shivered, her skin broken out in gooseflesh. The mermaid was a greedy, insatiable lover who was endlessly curious. The woman desperately loved to please her.

Because of the power of the tides, the mermaid could only come to the woman at night, so the woman spent her days making armor and dreaming of the nights she would spend with seaweed hair dripping salt into her mouth, limpid blue skin pressed against her, and webbed fingers on her body. In the early days of their affair with the sun high behind a blanket of gray clouds and the wind throwing its tantrums, the woman’s heartbeat would become syncopated with anticipation of the low, fat moons that would light her damp nights with the mermaid. After a time, though, the days began to feel endless, as if daytime was a different world from nighttime, and the woman grew anxious and bored of waiting. The crescents of her ribs and the knuckles of her spine began to show.

The woman went about her daily chores, scavenging along the beach, swimming through the icy ocean to find caves where the tide and fishermen had abandoned hooks among rotted boats, broken fishing rods, and frayed nets. Once she gathered her materials, she would knit the hooks into chainmail with deft, bloody fingers. All the while, the need inside her for the exotic creature grew ever stronger until she could think of little else.

One day, the woman hiked up the hill to the village to get eggs and bread. The village was green with carefully tended grass and trees. The houses were given several fresh coats of paint to ward off the effects of the salty sea winds. Inside the bakery, everything, even the air itself, was covered with a floury dust. The baker was a plump woman with strong forearms and a dew of sweat on her chest and upper lip. Her cheeks were filled with bright blood. When the baker smiled with surprising warmth and familiarity, the woman blushed. The baker asked the woman to join her for a bit of lunch.

Behind the shop, positioned beneath a break in the clouds where a sliver of sunshine fell, the two women laid out an old blanket and had a picnic. They shared deviled eggs and thick slices of soft bread with thick layers of soft butter on top. As the clouds closed and the air grew chill, the baker kissed the woman. Her lips were warm and dusted with flour. Her skin smelled and tasted of sweat and warm pastries.

The woman began to spend her days with the baker and her nights with the mermaid.

The woman hid around the bakery bits of treasure that she had earned in trade from the mer-people, slipping ancient rings around breadsticks and priceless necklaces around crisp loaves. The baker fed the woman chocolate-dipped, sugar-encrusted donuts, intricately decorated cookies, and hearty soup with hearty bread. The woman’s hollow cheeks and hollow belly slowly filled out.

All this time, the woman did not tell the mermaid.

Though the woman still felt the magnetic pull of the mermaid with her full, cold lips and her mystery, the once dark and hungry nights with the mermaid became luminous with guilt. The moon and the tide accused her of missing the heat of the baker’s bed, the softness of her embrace. Eventually, the woman confessed her secret affair to the mermaid. The mermaid, confident in the woman’s infatuation with her charms, trilled out cruel laughter at the “fat breadmaker” and insisted the affair cease.

The woman felt split right down the middle just like the mermaid’s fin was split into legs. That night their passion was brutal, the mermaid raking the woman’s skin with nails like fishbones. The woman drank in the rawness with an unquenchable thirst.

Day broke, and the woman was alone, her blankets and curtains drenched, the air in her cottage heavy with a salty mist. The woman trudged up the hill as if she was going to a funeral. When she saw the baker, the woman struggled to tell her lover farewell. The baker wept, her kind face twisted while animal wails rose from her throat.

The woman could not walk away. Instead she found her lips on the baker’s hot cheeks. Her tongue licked away sweat and tears. The woman kneaded the baker’s skin as if it was moist, soft dough. Together, the woman and the baker sighed in relief at their union.

The woman made her choice then and said goodbye, instead, to the mermaid. Now the woman does not miss the cold, ravening love of her mermaid princess. Now she and the baker live at the bakery or the woman’s cottage whenever they choose, and they are together or apart whenever they like. The women spend their days and nights eating and loving and full of warmth. 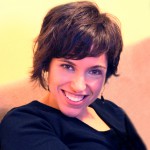 Amanda Rodriguez is an environmental activist living in Asheville, North Carolina. She holds a BA from Antioch College in Yellow Springs, Ohio, and an MFA in fiction writing from Queens University in Charlotte, NC. She is an editor and staff writer for the feminist film/TV review site Bitch Flicks, and she writes all about food and drinking games on her blog Booze and Baking. Fun fact: while living in Kyoto, Japan, her house was attacked by monkeys.