By the age of sixteen I had a will that could’ve sprung only from the conception of a particularly well-traveled child. I wasn’t actually well traveled—most every airplane ride of my youth was between some state and Massachusetts—but my father raised me in an America balanced somewhere between a tray table and a pack of salted peanuts. It was June and hot, and Trip and I were on a flight home from Minnesota, our last one together.

“Whatta you have against raisins?”

“That the girl whose father—”

“Yeah, manufactures ‘em or something,” he said. He wore a particularly unattractive green sweater and close-mouthed amusement.

Trip shoved three pretzels in his mouth. “Belmont at four and—”

“Yeah,” he said. “You see the McAlister’s? Racing family, you know. Spent six mil last year on breeding. There to the left. And not Arden. Kick myself if I were her. I would. I’d kick myself straight in the shins. Missing start day for some football game.”

“Would you get one of those brown, arrogant ones?”

“A horse, Trip. You get an arrogant one?”

“Yeah, and keep it in my closet. Think they’d let me keep one in the dorms?” Trip held The Wall Street Journal at his chest.

I ate a pretzel. “Don’t see why they wouldn’t let—”

Trip grabbed the pretzel pack from me. “You see this?” he said, leaning toward the little airplane TV. “McAlisters’ve got three in this one. Look at twenty-six. Twenty-six’s ‘gonna place,” Trip tightened his grip on the Journal, “Godchrist, fifty more—”

“Whatta ‘bout that one ahead?”

“Three? Three’s a Whiting. A Whiting’s good as two McAlisters. That’s what I bet John, anyway, that twenty-six’d be second.” And twenty-six finished second in a whopping of chocolate legs thin like chocolate sticks dipped in white at the ends, and Trip hit his newspaper on his thigh. “Yes. Yes!”

“Fifty now, twenty last month. Got too much faith in the McAlisters. Can’t pin a McAlister first against a Whiti—”

“Yeah. Caught on the McAlisters. Used to be good before he got caught.” He smoothed his newspaper. Looked over at me out of the huge dark eyes. “You’re going to Boston with me, aren’t you? To get that—”

“That sweater. I know, I know.” I ate another pretzel. Nudged the bag at him with the back of my hand. “Saturday?”

“If John’ll bring the money. He can’t bring a canister of tennis balls, but he might actually bring—” Trip smoothed down his newspaper on the muscled slant of his thigh. Paused. Said, “Hey. You have the stuff we’re supposed to take? The amoxicillin?”

“In the carry on?” I pulled the leather bag up from my feet. Rummaged around it. “Only the pills.”

Trip shoved his pretzel bag in the seat pocket. He had a strange look on his face that I would have taken for fear had I ever recognized such an emotion before among his features. I had not. (At the Dover house we kept a flashlight on the table between our beds—it sat there for more than ten years—and never once had Trip stirred in the night to reach for it.)

“Can’t take pills,” Trip said. “Ever thought of that? How we can only drink that horrible pink stuff? And that we can’t do our own ties?”

“But you can make a tank and tonic in your sleep,” I said.

“Anyone can make a tank and tonic,” Trip said.

“Dad can’t make a decent one.”

“He’s from Vermont. They drink fermented syrup or something in Vermont.” Trip tugged at the collar of his particularly unattractive green sweater, “We could have turned out alright, you know. If she hadn’t gone and died.”

“She wouldn’t have let—”

“You’re going to college in a month.”

I pulled the empty pretzel bag from the seat pocket. “Quit the martyred shit, Trip. You’ve got money for every fucking thing you could ever want. You look like a fucking statue and who cares who can take pills and who can’t—”

“You’ve got the most narcissistic face I’ve ever seen.”

Trip tipped the pretzel-pack to get at the salt. Moved his mouth from behind us. “Order us some ginger ale.”

“I don’t care you don’t like it, just order it.” He made room about the things which covered his tray.

Among the moved objects was a Hemingway book, two napkins scribbled with the hieroglyphs of tic-tac-toe with shitty pens, a box of raisins — which the night previous had given Trip some revelation under the overhead light that he was going to die sometime because they smelled like dirt. Also, a pack of spearmint gum, an empty water bottle, a letter from Caroline with Diet Coke stains, part of which was visible from about the wrappers:

. . . been wearing the Wellesley pullover—remember when you bought that for me? I tan in that with an ice pack on my shoulders and eat the little candy nibs out of the cereal. The blueberries’ll be ready soon. Maine in August is beautiful like New America, but I miss your neck in my throat and I miss Wellesley and the softserve in the cafeteria etc. etc. . . .

Trip gave me a handful of the m&m’s he’d had me order for him with the ginger ale. I put one on my tongue-flesh, a red one, and threw my head back in that small, learned, act of courage, in which man exhibits himself.

Trip was looking at a few of them in his hand. Green, blue, orange.

“Hey, I’m sorry,” he said, after a while. He meant about Mom. It was kind of a code that we didn’t talk about her but in vague allusions. Part of the code, also, that Dad bought us overpriced chocolate turtles from the big glass case at the drugstore on her birthday each year.

He nudged my shoulder. “We’re not half bad.” He took another chocolate from his palm, threw it back into his throat with the ginger ale. Resurfaced. “Know what she’d say? If she knew us?”

“That we’re smart above our shoulders,” he said. “Got good heads on them.”

I’m sitting at the desk in my old bedroom at Dover. Trip is dead now. He learned how to take pills. He learned well enough, in fact, that he took seventeen with a single glass of water. We found him in the morning with the flashlight clutched to his chest.

It took me the good majority of two years to drag myself here without seeing his body on the twin bed. To write this, in whatever effort this is aimed at: to preserve or forget him.

Who was Trip? He liked the tender spot in Caroline’s neck and he liked airplane peanuts and he enjoyed soft serve and he was noble in many ways. It’s not a matter of sentiment that there’s nothing else to say. We always were journalistic in our statements concerning each other.

A final comment? It’s his bravery that killed him. He always was so stupid and brave. 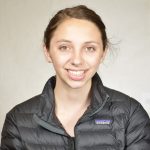 Alexandra A. Reinecke is a writer and journalist who uses writing as a tool to encourage empathy and affect positive change.