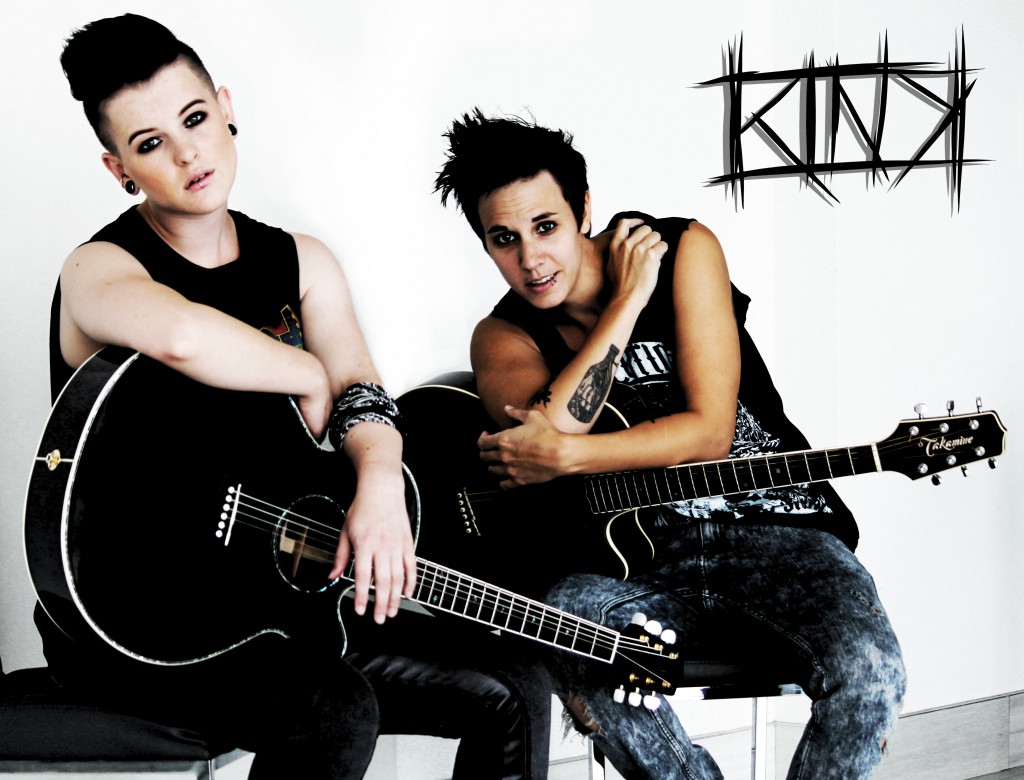 Toronto-based band KINK is made up of Erica Schiopu and Dani Gagnon, and though they haven’t been playing together for very long — less than a year, in fact — they sound as though their voices were always meant to meld. Both of them have distinct voices, but their blend is impeccable (having spent my whole life in various choirs, this is something I appreciate above most things).

Described as “grunge rock,” there is definite angst and some yelling, but that’s not to say that the musicality suffers at all. With little more to go off of than some YouTube covers, I’m still completely hooked, and I think you will be too.

I got to talk to KINK about their experiences as a band.

Germ Magazine: Hello! Thank you so much for agreeing to this interview!

First off, tell me how you each got into music. What made you want to be a musician? Then, how did you form KINK?

Erica: I honestly can’t even remember when I first got into music… I’ve been into music since I was a little kid. I watched my Dad’s U2 concert DVDs with him and secretly wished I was Bono or the Edge playing for millions. I remember listening to Elvis, No Doubt, and Janis Joplin on family road trips and playing air guitar to all the tracks in the backseat. I begged my mom for a guitar, and she told me I had to wait until I turned 10 until I could play. On my tenth birthday I got my first little Yamaha guitar. The rest is history!

Dani: I grew up playing instruments: violin when I was 4, piano lessons until I was 14 — I played percussion and trumpet throughout all my high school. I picked up my first acoustic guitar when I was 14 and started playing the drums at 15. All inspired by my love for punk rock; I was pretty into Blink 182, Green Day, and Alanis Morisette throughout my youth as an attempt to defy the suburban culture I was so strongly raised in (I’m from Oakville).

We met on Tinder — a super hilariously odd story. We quickly became friends and bonded over similar music tastes, and after a few weeks we started dating. It was actually only about 2 months into our relationship that we decided to leave our other musical projects and collaborate since we were spending all our time together anyway and had similar musical goals. We both were worried at first that dating and being in a band together was a bad idea — but we’ve learned that for us it is a huge asset. We practice together almost every day and write songs naturally; we can work on band stuff throughout the day or while we’re at concerts and never have to announce news “to the band.” It’s actually quite refreshing.

GM: That is amazing! On your Facebook page, you’re classified as “grunge rock.” What drove you into this genre specifically?

KINK: We very much struggled finding our genre actually; we’re still not completely adhered to using “grunge rock” to define ourselves. However, based on our style and our influences, we decided it was a good genre for now. Our music sometimes features pop-like arrangements but contains grunge characteristics like screaming, low harmonies, and abstract guitar parts. On our website we call ourselves “female acoustic grunge duo” which probably hits the mark a little better.

We actually had a harder time figuring out our name! We spent an entire trip to Montreal pointing at every sign and object in sight until we used the word “kink” in a sentence and both had an “AHA” moment. Our runner up name was “The Bear Handle,” so it’s probably a good thing we came up with KINK.

GM: I agree. Who and/or what would you say have been your biggest inspirations or influences?

Erica: I would say my biggest inspirations have been strong female figures in music, particularly in the rock genre. I think a lot of girl rock is missing in everyone’s lives. Artists like Joan Jett, Brody Dalle, and Taylor Momsen from The Pretty Reckless are huge for me. I also look up to Lady Gaga and Pink, who are strong women in the music scene today. As for sound, I’ve drawn from many genres and artists — from Tool and Deftones to Avenged Sevenfold and Porcupine Tree. I’m a sucker for good metal and prog rock.

Dani: I am definitely more on the pop-punk side: Blink 182, Taking Back Sunday, Dashboard Confessional, and New Found Glory were always big in my life. I was definitely obsessed with Warped Tour as a kid, so punk bands like Rancid, Hole, and The Distillers geared my guitar-taste. Then I have a flare for hardcore and screamo; Alexisonfire, Silverstein, and Boys Night Out gave me a great taste of rock while I was in high school. I am a complete die-hard Brand New fan. If you haven’t heard them, go listen to them now.

GM: Because this is something that a lot of people who aren’t in music might not think about, I think it’s important to address: The ratio of men to women in the music industry is heavily weighted in favor of the men. Do you ever feel that there is some discrimination against you as a band or as musicians because of this?

KINK: This is definitely something we always want to address! There are far less women in the music industry, and the ones who are, are more in the pop scene. We haven’t experienced discrimination as KINK to date; however, both of us have individually experienced this before as musicians. We have gone for auditions before and have gotten turned down before even getting to play because bands didn’t want any girls in them, and [we] have been sexualized within bands or on stage because of our gender. A lot of guys assume girls can’t play instruments as well as they can — but at the same time there are a lot less female musicians than males to draw from. We feel as though this is because parents generally do not gear their daughters towards electric guitar, bass, and drums. Maybe this will change one day as more female rock artists emerge. Even our parents are not keen on us having careers in rock, and most of that comes from the dangers of being in a rock band (going on tour, playing small gigs in small towns, etc…) and being a female in a male-dominated world.

GM: Switching to a lighter subject, do you have any weird or funny stories of things that have happened while you were on stage?

KINK: We haven’t played too many shows together as a band yet, but at our last gig Dani was super sick; she was on antibiotics and was coughing with a sore throat and fever. She brought an entire ginger root on stage and was munching on it throughout the show. It brought a comedic element to our show for sure. She even brought a chair on stage for the root and deemed it “The Ginger Chair.” We try to make the best out of our worst situations.

Generally during our gigs, our banter is pretty funny; we tend to get people laughing a lot by our natural, unplanned genuine relationship showing on stage. We really feel that the between-song banter is almost as important as the performance itself! We try to be as authentic as possible, even on social media.

GM: That’s great. Now, I know that Dani also has a marketing firm called Dani G Inc. What is it that you do there, and how, if at all, has that contributed to the band?

Dani: My firm specializes in social media marketing, but we also do video, animation, graphic design, and traditional marketing. It has definitely given us leverage compared to other bands. Firstly, we have access to a lot of things most bands don’t: my company has great camera gear, tools for social media, editing equipment as well as my staff who are skilled and have time to work on projects for us. Secondly, just on a social media level, we’ve managed to treat the band as a business (or client), and instead of having to learn these skills, we are one step ahead. We know how to leverage being at a concert on Twitter, we always have business cards on us for networking, our graphic design is on point, and we produce our own videos. I also encourage bartering often with my clients; this has enabled us to get websites, merch, etc… at no cost! Obviously these are all really great benefits for the band.

GM: Finally, where can those of us not in Toronto find your music?

KINK: We are currently in studio working on our demo, but if you want to hear our songs or some cool covers, the best place to find it all is on our website. Our demo will be up all over the Internet as soon as it’s done!

GM: Can’t wait! Thank you again for taking the time to talk with me. You are both so rad, and I’m really excited to see what you’ll do in the future.

KINK: Thanks so much!

Check out KINK’s acoustic demo, “Keep Me Away”: